That is, the model estimates parameters of these two types of signals. The parameters govern the steepness, amplitude, frequency and noise of both signals. Each type of signal is shown in the examples below:

These benchmark signals represent a typical use case in many scientific instruments for example Nuclear Magnetic Resonance and Cavity Ring-Down Polarimetry/Ellipsometry (CRDP/CRDE) [1] to analyse the chemical constituents of substances. The signals typically have fast decay times in the order of $[10^{-2}, 10^{-1}]$ in case of NMR and $[10^{-7}, 10^{-5}]$ in CRDP/CRDE. These fast decay times pose a challenge for instruments which struggle to estimates paremeters at speeds up to 4.4kHz, even when implementing specialized hardware using frequency-based methods.

The goal of the method described in the paper is to achieve higher rates of analysis using autoencoder machine learning methods. The autoencoder model is fed a signal as input and recovers estimated parameters $\tau, f, \phi$. The results demonstrates the high efficiency of model which manages to recover parameters at much higher rates (200kHz) even while running on non-specialiced commodity hardware. The goal of this article is to reverse the model and train such an autoencoder model to estimate parameters as outlined in the paper.

The autoencoder in the paper uses dense neural network layers that are symmetric in both the encoder and decoder. In this work the latent space have the same number of dimensions as the number of parameters sought to be learnt. The number of neurons in each layer, in case of the decaying exponential, is $1000, 50, 1, 50, 1000$ and $1000, 50, 10, 3, 10, 50, 1000$ in case of the decaying oscillator. The number of layers and their width was determined experimentally according to the paper and moreover the neural activation function is the hyperbolic tangent.

Training is performed in three-steps:

These steps are repeated 10 times for a dataset containing samples from $y_{\textrm{exp}/\textrm{osc}}$ having fixed $\tau, f, \phi$ and noise $y_0$. In total the autoencoder is trained on 10 such datasets with an signal-to-noise ratio of $2^{20}$.

The three-step method enforce both that parameter extraction from the latent representation is meaningful and that this representation matches the parameters of interest (and not something else). The authors show experimentally that this three-step training converge to the same result as training the whole autoencoder only, while satisfying both requirements for parameter extraction and signal reconstruction.

The three-step training is repeated for 10 different choices of $\tau, f$ and $\phi$. In creating the signals, the following distributions are used:

The encoder output for estimation of $\tau$ (exponential decay) is shown below after training on each of the ten databases:

Using the above training paradigm to learn an encoder to estimate $\tau$ the result from such an estimation is compared side-by-side with a numerical least-square fit of the parameter. The figure below was created using a model built and trained using Tensorflow. 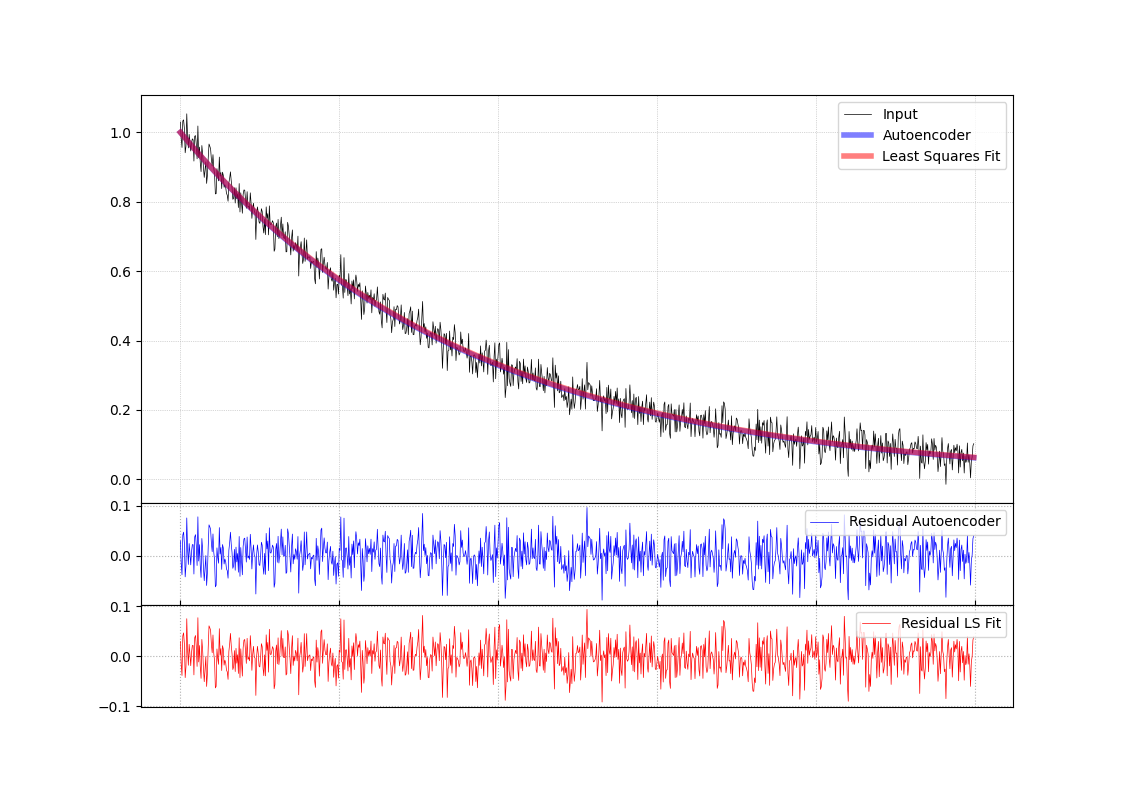